Creating 2017’s reading recap was so fun that I’ve done it again for 2018! Once more I put myself through the difficult process of choosing books to highlight from my reading life last year, which is also a highly enjoyable process. I met my goal of reading 80 books, although I’ll admit I had to knock out two shorter ones on December 31st, and so many of those books forced me stay up late for just one more chapter.

Three books in my current pile…

While my To Be Read list grows faster than I can finish books, I don’t want to forget the best ones I read in 2018, so I’m sharing them to convince other readers that these are books worth devoting time to.

Remember, I read a wide variety of genres with varying content, so I’m issuing a blanket content warning for any and all books I mention online. Use your own discretion for your comfort level, and feel free to ask me about the books I’ve read.

Do you want to read more but don’t know what books to pick up? You aren’t alone; lots of people struggle with that. There are tons of ways to find good books, but finding the right book for you can be a different story.

I recommend Modern Mrs. Darcy and the podcast What Should I Read Next, or you can ask the readers in your life if they have any recommendations for you. Don’t be afraid to put a book down unfinished if it’s not for you – there are too many good books in this world to waste precious reading time on a book that you don’t like. (I need to take my own advice!)

The Book I Finally Read:

His Majesty’s Dragon by Naomi Novik

In the middle of the Napoleonic Wars, a young naval officer accidentally bonds a dragon hatchling and his entire life changes. I love a good fantasy where the worldbuilding is so matter of fact that no one blinks at the wild and unusual places the author’s imagination goes, and this book has that in spades. Nineteenth century Europe with dragon, aerial corps fighting in some of the biggest battles between Napoleon and the rest of Europe, all narrated in Regency prose. This book has been on my TBR for ten years, ever since I saw a 4-H friend reading it before bed on a club trip to the Rolex Kentucky. My friend was killed in a car accident three years later, as a college sophomore, and I’m so glad I finally read the book, with her in mind.

What’s So Amazing About Grace? by Phillip Yancey

An exploration of grace at the levels of ordinary life and overarching church culture, this book is remarkably relevant for being twenty years old. I was challenged, inspired, and humbled by Yancey’s words. It’s filled with true stories and simple prose, and Yancey shares some of his own journey toward grace. Our world is full of anger, bitterness, and hatred, but this book challenges us to take a hard look at ourselves and ask if we are truly ambassadors of God’s grace to the world, or if we are doling it out only to the ones we think deserve it. I think it says a lot that we as a church are struggling to give grace to the same people we struggled with twenty years ago, and I think this book offers powerful thoughts to consider. 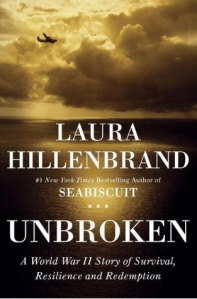 The Book I learned the Most From:

An Olympic runner joins the Army Air Forces, is stranded at sea, becomes a Japanese POW, and somehow survives to tell the story. Not only is Louis Zamperini’s story an incredible tale of grit and bravery, with an amazing twist toward the end, but I learned so much about the Pacific front of the war that I was completely unaware of. From the thousands of POWs, the terrible accident rate of the planes and their crews, and the sheer enormity of the war, Hillenbrand provides mountains of detail without ever losing her narrative. If you never read another book about the Pacific front, read this one – she’s a powerful storyteller and you won’t be disappointed. 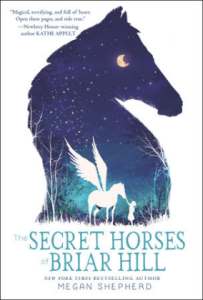 The Most Fun Book:

The Secret Horses of Briar Hill by Megan Shepherd

A young girl, living in a hospital with other children in the English countryside, finds that one of the winged horses she sees in the mirrors every day has entered her world. An absolute delight, this book would have been one of my favorites if it had existed when I was a child (although it’s high on the list for me even now). Not only does the girl have a special bond with a winged horse, she has to protect the horse by collecting objects of specific hues of color while also living with the realities of life during WWII in an English hospital. Whimsical while dealing with serious themes, strongly influenced by The Chronicles of Narnia, I highly recommend this book for younger readers. 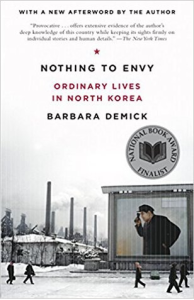 Nothing to Envy: Ordinary Lives in North Korea by Barbara Demick

A journalist traces the stories of six North Koreans over fifteen years, through the death of Kim Il-sung, the rise of Kim Jong-il, and the devastating famine that killed millions of people. For me, North Korea has always been a vaguely menacing, partially absurd Communist dictatorship on the other side of the world that I knew little about. Now I know quite a bit, and it’s all heartbreaking. Demick vividly sketches the country’s slow grind toward industrial death, economic collapse, and starvation, and the wide gulf between south and north becomes ever more stark and terrible, depicted on a personal level by the six North Koreans and their stories. This book was written prior to Kim Jong-il’s death and his son assuming control of the country, and I would love to find an update detailing the changes – if any – that a new regime and the immense shaping of the world by the internet has brought to a country so isolated.

Bonus Book: Another Place at the Table by Kathy Harrison

A foster mom tells the stories of just a few of the dozens of children she has fostered, and I cried at several points (which I rarely do for books). Yet somehow, the book also fosters hope.

The Glass Castle by Jeanette Walls

A family’s story is never simple, particularly a story that begins with charismatic parents chasing wonder and nonconformity on a nomadic trip across the country, stops in a poor mining town where the children must employ all their grit to carve out a life from intense neglect, and reaches New York City, where the children build lives as empowered adults and their parents choose homelessness. The beautiful, clear prose is nothing compared to Walls’ ability to present her family’s story as she saw it unfolding with no hindsight, no bias, and no filters. Her childhood was both magical and terrible, sometimes simultaneously, and I recommend this book as an incredible memoir.

The Most Evocative Fantasy:

The Golem and the Jinni by Helen Wecker

A golem and a jinni find themselves in New York City at the turn of the century, meeting by chance, and their opposite natures bring them together yet push them apart as they seek to create lives for themselves in the shifting chaos of the city. With the magic of folktales and literature, Yiddish and Middle Eastern culture, history and fantasy all woven together in one story, this book is compulsively readable. It brought me back to my middle school days of devouring fairytales by the dozens (although this book is not intended for youngsters). The prose is clear and elegant, but the characters really shine. Chava and Ahmad come to life (literally, in Chava’s case) through their emotional journeys, and although the book doesn’t end quite where I wanted it to, I was delighted to discover that a sequel is in the works.

You may have noticed that I mostly chose books for the same categories as last year, but that I replaced the favorite category. This year I read a lot of books that I loved, so I couldn’t bring myself to pick just one favorite. Last year was an anomaly!

I could share dozens more fantastic books, such as the two Guy Gavriel Kay titles I loved, the multiple memoirs and nonfiction narratives that taught me so much about other peoples’ lives and worlds, or the quiet dystopian novel that surprised me with its power, but I won’t overwhelm your TBR list.

If you want to keep up with what I’m reading all year, I post on Goodreads regularly, so come friend me! I do confess that I want you to friend me so that I can follow your reading life – my TBR list is always ready for more titles.

In 2018, I read Jane Eyre, the final Harry Potter book, and a Shakespeare play (Titus Andronicus), just as I intended to, and in 2019, my priority list includes Persuasion, The Merchant of Venice, and The Martian.

This year, I’m not setting a goal for my reading life. I originally set goals to help kickstart my reading habit again after graduating from college, but now I want to see how many books I tear through without the numeric finish line taunting me. Also, I want to reread some old favorites, and I’m not inclined to do that with a goal, for whatever reason.

Right now I’m going to go finish a thriller with characters that are pretty boring (so maybe I should actually just put it down for good…). My library is closed for carpet replacement for most of January (so sad!), so I’m currently limited to books from my own shelves, with a few thrown in from my roommate’s collection. Time for those rereads!