I was born with red hair. 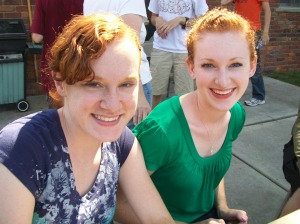 Me on the left, Anna on the right.

What was it like, growing up as a redhead?

Well, since I was homeschooled, I never suffered any teasing or bullying from classmates like so many redheads do.

But adults commented on my hair all the time, which was great for a while. As a kid, I did get tired of hearing it all the time. But one of my minor

childhood fears came from those compliments. Women would say, “I wish I had your hair! People spend money trying to get that color. I’ll trade you!”

Men would say, “I’ll just cut your hair off and give it to my wife.”

I did not want them to cut my hair off. I knew they were mostly joking, but I also knew that people really do love red hair, so I was never sure if someone might follow through on that statement.

I didn’t like my red hair when I was little, because it was so different from everyone else. It did help when I read Anne of Green Gables, because she felt the same way. I never tried to dye my hair, though. Anne’s green hair experience definitely made me stay away from that, and now I’ve realized that my hair is too bright to dye well. That’s okay, though, because now I love my red hair.

Whenever people describe my family, we’re “the family with the redheads”. My poor blonde and brunette sisters get the short stick on this one.

People assumed that Anna and I were twins for most of our lives, but we don’t look any more identical than the rest of our siblings do. Because we’re close in age, sisters, and both redheads, people think we must be twins! I have to say, being older by two years definitely made this question one that I did not appreciate.

Okay, so we do look a lot alike…

To be a redhead is to be very unique. Red is the rarest hair color in the world, as under 5% of the world’s population has red hair. You can never hide in a crowd, and you will always stand out. I’ve gotten comments about my hair at work, at the grocery store, at the library, at church, and from random strangers pretty much anywhere and everywhere. I don’t mind the comments (and the almost inevitable compliment never fails to make my day), but they are truly never-ending. Because I have very curly hair, I get double the comments. I’m still not sure why people always ask if the curls and the color are natural, though.

People assume a lot of things about redheads. We have our stereotypes just like any other groups does. The first question I hear (other than “Is it your natural color?”) is “Are you Irish?” In my case, I do have Irish roots, but plenty of redheads don’t. Redheads also have the stereotype of having a temper. For me, that’s not true. For my sister–well, she lives up to that one better than I do.

I’ve gotten called Red on occasion, but no one has ever addressed me as Carrots or Ginger, thank goodness.

Red hair goes hand-in-hand with very pale skin. People don’t always believe me when I tell them how easily I get sunburnt, but once I got burnt after two hours outside. On an overcast day! It wasn’t a minor burn, either. Second-degree sunburns and I are on a first name basis after more than one encounter. And because my skin is so pale, the burn doesn’t fade quickly, either.

And this picture was taken 2 days after I got sunburnt!

Most people complain about tan lines. I don’t tan, ever, so I complain about freckles. My skin burns, sheds skin like a snake, and then sprouts 500 freckles overnight. It’s exciting when I’m 1 shade darker at the end of the summer.

Red hair does make for invisible eyelashes. But I’ve also heard that redheads don’t go gray, so there’s that.

I like being a redhead. It’s like being part of some super exclusive club that lots of people try to fake their way into. I’ll never fade into the background because my hair will always stand out, like a house on fire. 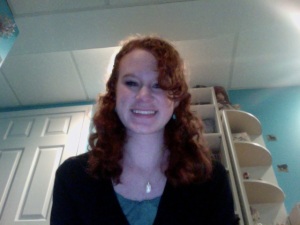 (And if I ever decide to cut my hair and give it away, you’d better get on the waiting list, ’cause it’ll fill up fast! :) )